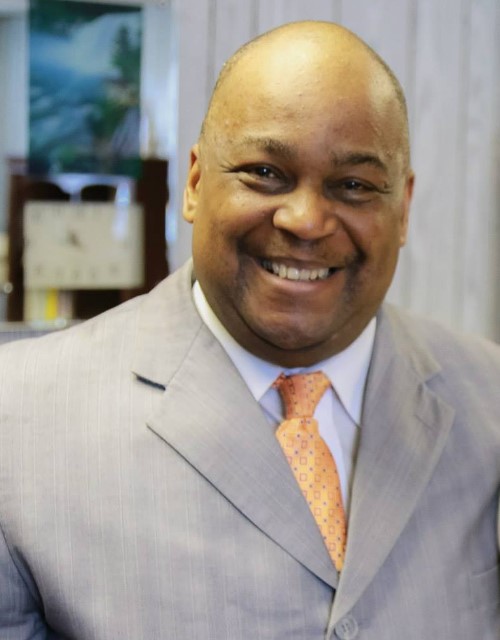 Pastor Michael H. Harrison, Sr. was born to the late Pastor John H. and Rosa Harrison on December 25, 1956. Pastor Harrison graduated from Central High School in 1975 and attended U.S.I.T. where he received  a degree in Electronics. Pastor Harrison attended  International Bible Institute and Seminary, graduating  with a BA in Theology and attends Geneva College  pursuing a degree in Counseling.
Pastor Harrison is married to Sylvia and has three children: LaTonya, James, and Michael Jr. and grandchildren.

Pastor Harrison worked in Computer Operations and the Help and Information Centers of Goodyear Tire and Rubber Co. in Akron from 1977 to 1985. His responsibilities included Data Processing on the mainframe computer; assisting company personnel with computer processing problems and helping employees improve productivity.

In 1985, upon leaving the Goodyear Tire and Rubber Company, Pastor Harrison went into full-time ministry at the United Baptist Church in Akron, Ohio. There, he coordinated the church’s Christian Education program. His other responsibilities included Children’s Church, Teens Ministry, Singles and Marriage classes, the Help Ministry, Evangelism, Revival promotions and the Transportation Ministry.

In 1989, Pastor Harrison was called to the Pastorate of the Mt. Olive Baptist Church in Midland, Pa., where he founded the Pastor’s Council of Beaver Valley and vicinity. He served as President of this council. Under his pastorate, the church was remodeled and the Ministries of the church were broadened in the community. He also served as Treasurer of the Allegheny Union Baptist Association.

In 1995, Pastor Harrison was called to the Pastorate of the Union Baptist Church, Youngstown, Ohio. Under his leadership, a new sanctuary with seating capacity of over 800 was built and occupied in 1997. The congregation grew from 125 to over 650 in four years. A new van was purchased and paid for in six months; the parking lot was excavated and paved, and a $60,000.00 loan for a balcony in the sanctuary was paid off. The old sanctuary has been stabilized and was refurbished as the J.D. Jones Family Life Center and the Fellowship Hall was dedicated as the J.H. Maiden Fellowship Hall. Under the leadership of Pastor Harrison, Union Baptist has been blessed with many new ministries to meet the needs of the congregation and community. The Sanctuary Mortgage was paid off and burned on May 21st 2006, eight years in advance!

Pastor Harrison is Past National Chairperson of the Oasis Network African American Leadership Commission and is the former National Clergy Caucus representative of AALC to the National Leadership Assembly of the Gamaliel Foundation.  Pastor Harrison is the current President of the Ohio Baptist State Convention and is Chair of MVOC (Mahoning Valley Organizing Collaborative), a community based collaboration of Churches and Block Clubs for the betterment of the Youngstown/Warren Regional Area.

He is currently the 1st Vice Moderator of the Eastern Ohio, Western Pennsylvania, Northern West Virginia Baptist Association and is the past president of the Baptist Pastor’s Council of Youngstown and vicinity.  Pastor Harrison is on the Advisory Board of the A.B.T. Extension School, which started in the fall of 1999.